Earlier this summer my friend Jim – Milanese munro-bagger – messaged me about another munro-bagging trip. With only 37 munros left he’d some of the best, the wildest and most impressive hills to do. This time the goal was to do 10 munros in Kintail over three days, based at Camban bothy.

My instructions were to rendevous at the Clunie Inn at 10pm on Tuesday 31st of October. I was to bring with me one breakfast and one evening meal for four people and space in my rucksack for 10kg of coal!

Me, John, Terry and Jim met up as planned in the darkenss outside the Clunie Inn and quickly got ourselves organised, leaving cars at loch Clunie, below Carn Ghluasaid – our intended end point after three days – and then driving down to Morvich to camp… somewhere that was free, dry and not too far from the road.

We woke early. Overnight it had rained and rained and at 6am that morning it was grey and gloomy.  Our goal for the day was for Terry and I to walk to Camban bothy, about 12km east and 1000ft up. Meanwhile Jim and John would hike up A’Ghlas Bheinn then return to the car, collect coal and overnight food and kit and follow our route to the bothy.

Our rucksacks were predictably heavy. I had a 10kg share of the 25kg of coal we’d carry in. This, with the food and overnight kit, meant my bag weighed 25-30kgs altogether. Despite rain and sore shoulders, Terry and I enjoyed our walk and spent time catching up on a year’s worth of news.

Terry is an American woman I met 23 years ago in Svalbard. I was her guide on a week long trekking tour in Dicksonland. On that trip we contended with river crossings, lots of spring snow, steep scree slopes, the threat of Polar bears and equally heavy rucksacks (see photos below). Terry’s love of the Arctic and her sense of adventure made us firm friends and we’ve kept in touch ever since. 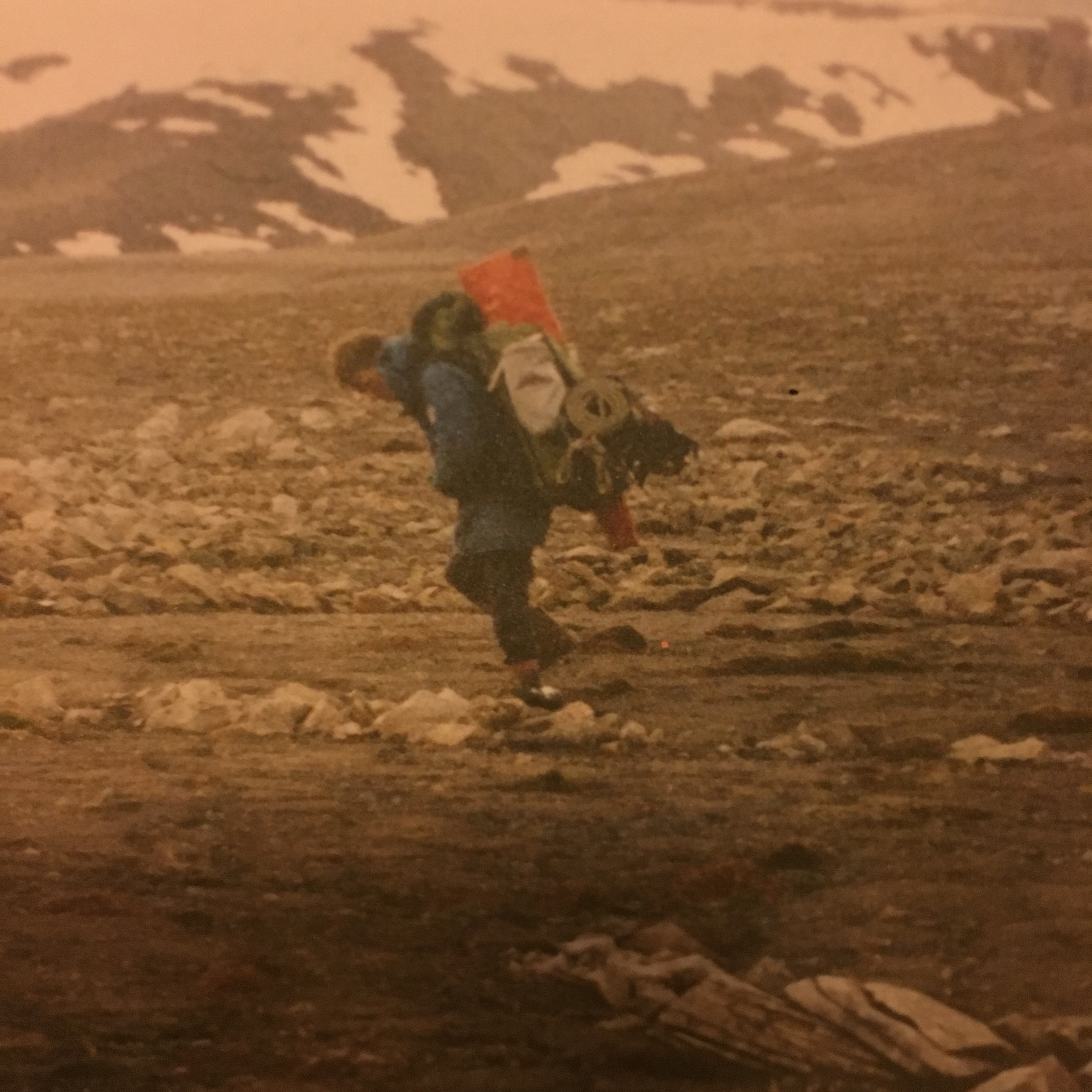 Unfortunately, after a few hours of walking towards Camban bothy a worsening injury made us head back, before the we got too committed on the steep section of the hike. We got back to the car, just as Jim and John returned from A’Ghlas Bheinn. Regretfully we said our goodbyes to Terry, but not before she passed into our care three tupperware boxes of home made brownies!

So… at about 2pm, reset and accompanied by Jim and John this time, I started walking again to Camban bothy. Glenlicht Lodge, 6km in, marked the end of the flat section of the walk. Next was the uphill bit, past dramatic waterfalls, to the watershed and a final flat section to the the bothy. The rain never really let up and the streams throughout the day got bigger and bigger. After dark, soaked and pretty tired we arrived at the bothy, at 5:30pm. Thankfully the fireplace at Camban is a good one and we had enough coal to dry off all our kit and get ready for the second day.

Our plan on Wednesday was to do the ‘Kintail brothers’, four munros that neighbour the more well known Five Sisters of Kintail. Careful route-planning meant that we avoided crossing the swollen rivers and mountain streams. After 8 long hours in the rain we returned to the bothy, having ascended Saileag (the most westerly one), Sgurr a’Bhealaich Dheirg, Aonach Meadhoin and Ciste Dubh.

Overnight the weather improved. Thursday was clear and sunny and a bit colder. After filling in the bothy book and tidying up we left Camban and headed to bridge over the river Affric, by the youth hostel (closed at this time of year). 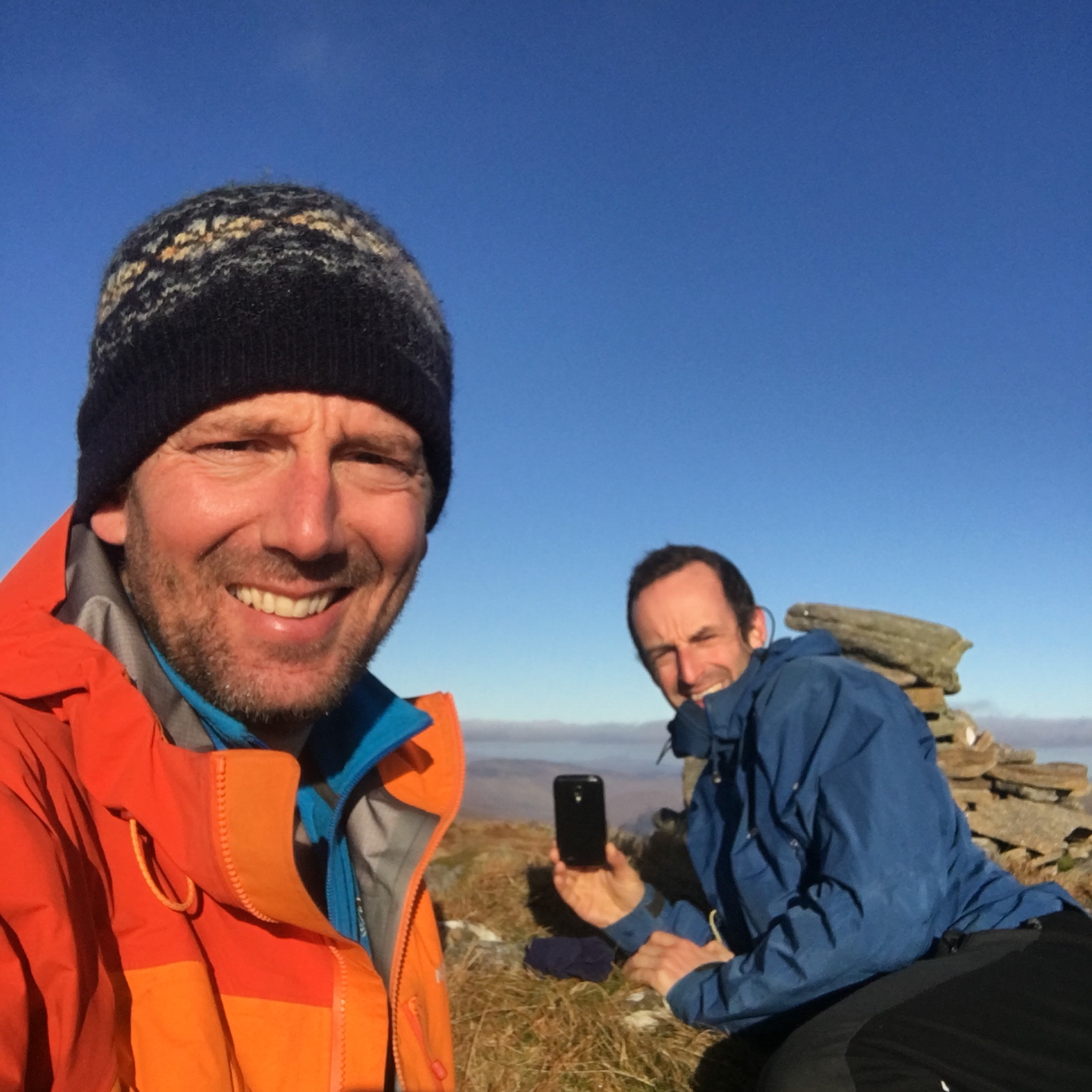 Once on the south side of the river Affric we began a long 2 hour ascent of Mullach Fraoch Choire (meaning summit of the heathery coire), the first of the five North Clunie munros we intended to do that day. We enjoyed the warmth of the sun on the summit and fantastic views to the Kintail munros to the west.  The rest of the walk was a delight. We steadily ascended and descended the next four munros, ending in Carn Ghluasaid (meaning hill of movement). The final descent to Loch Clunie and our car was pretty easy and we finished up just as the sun began to set – 9 hours altogether.

So another successful trip brings Jim’s munro tally to 255. Potentially the South Glen Shiel ridge and Sgurr na Sgine will be next between Christmas and New Year. Should be fun.