A kishie is a traditional Shetland basket made from plant materials.  Up in Shetland there aren’t many willow trees that are so useful in basket-making. That meant, in the past, Shetlanders had to craft baskets and creels from other materials like oat straw, soft rushes, docken, marram grass and even heather. This summer I was in Shetland and learnt about how floss (soft rushes) were used to make simmens (rope) and how, with straw or dockens, kishies were made to carry things like peat and fish. 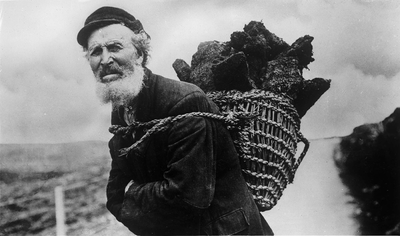 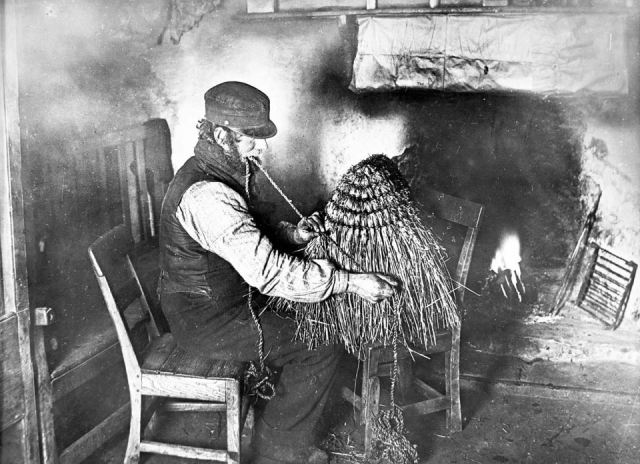 My father’s side of the family are from Unst, the most northerly isle in Shetland. My grandparents, auntie, uncles and my dad grew up on a small croft called Feall, on the side of a hill overlooking Haroldswick. Their life as crofters meant rearing sheep, digging peats, growing tatties and neaps, milking their one cow and walking everywhere: a hard life, but one that’s connected strongly to the past. The crofting way of life together with storytelling, music and language connected them to a way of life that has continued in that place for hundreds of years.

Here’s me as a child (red jumper and red wellies) with my granny (Kathleen Ewen) at a rooing at Burrafirth cru (a sheepfold), an event where the community worked together to gather the sheep off the hill and shear them. Below that another photo of me with my grandad (George Ewen), watching him gather up straw at my great-grandfather’s croft at Bothen. 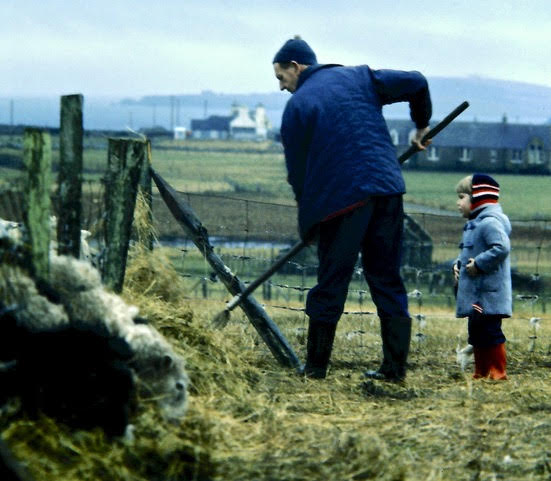 I am facinated by this continuity and connection with the past and place. I am interested in how Shetlanders, over generations, developed a special insight into the landscape, sea, plants and animals and how this enabled them to thrive on these small islands in North Atlantic. This, in a way, is what bushcraft is all about: acquiring skills and knowledge; through close association with a landscape. Making a kishie for me was about learning some of these skills and connecting in a small way with a way of life my grandparents and great-grandparents lived.

As well as looking at museum exhibits and speaking to folk from Unst, I learnt a lot about making a kishie from reading an article by Ewen Balfour on the woven communities website. There, Ewen sets out, step by step, how you make a kishie and the type and quantity of materials you need. Ewen’s article said I needed 22 fathoms of simmens, that’s about 40m. I collected batches of soft rushes Juncus effusus (see photo below) over the autumn and let it dry for a week or two. If you weave them when they are fresh they have a tendency to break. Once dried however they gain a chewy-like pliable texture and become stronger and easier to work with.

To begin with I could only make about 4m at a time, as blisters developed on my thumb and forefinger. Over time the skin hardened and I could do more and more. Ewen,  in his article, writes about how crofters would gather with friends, neighbours and relations to spend the evening “windin simmens“, sharing stories and supper together.

Eventually I had enough simmens and coiled the 22 fathoms from each end to form two balls or clews. They were coiled in such a way so that I could pull out lengths of simmens from the centre of each clew.

Next I collected dockens Rumex obtusifolius from Dawsholm park in Glasgow. This is the plant you use to soothe nettle stings, with big green leaves. It’s stalk is tall and in the autumn it takes on a rusty red colour. I collected about 100 stems. The stems are very brittle and needed to be soaked to allow them to bend. I learnt afterwards that I didn’t soak them long enough; after 4 hours in the bath they were still brittle and tended to snap, particularly at the last stage of the process when I bent the stems over to form the rim or mouth of the kishie. Next time I will soak them for 24 hours. 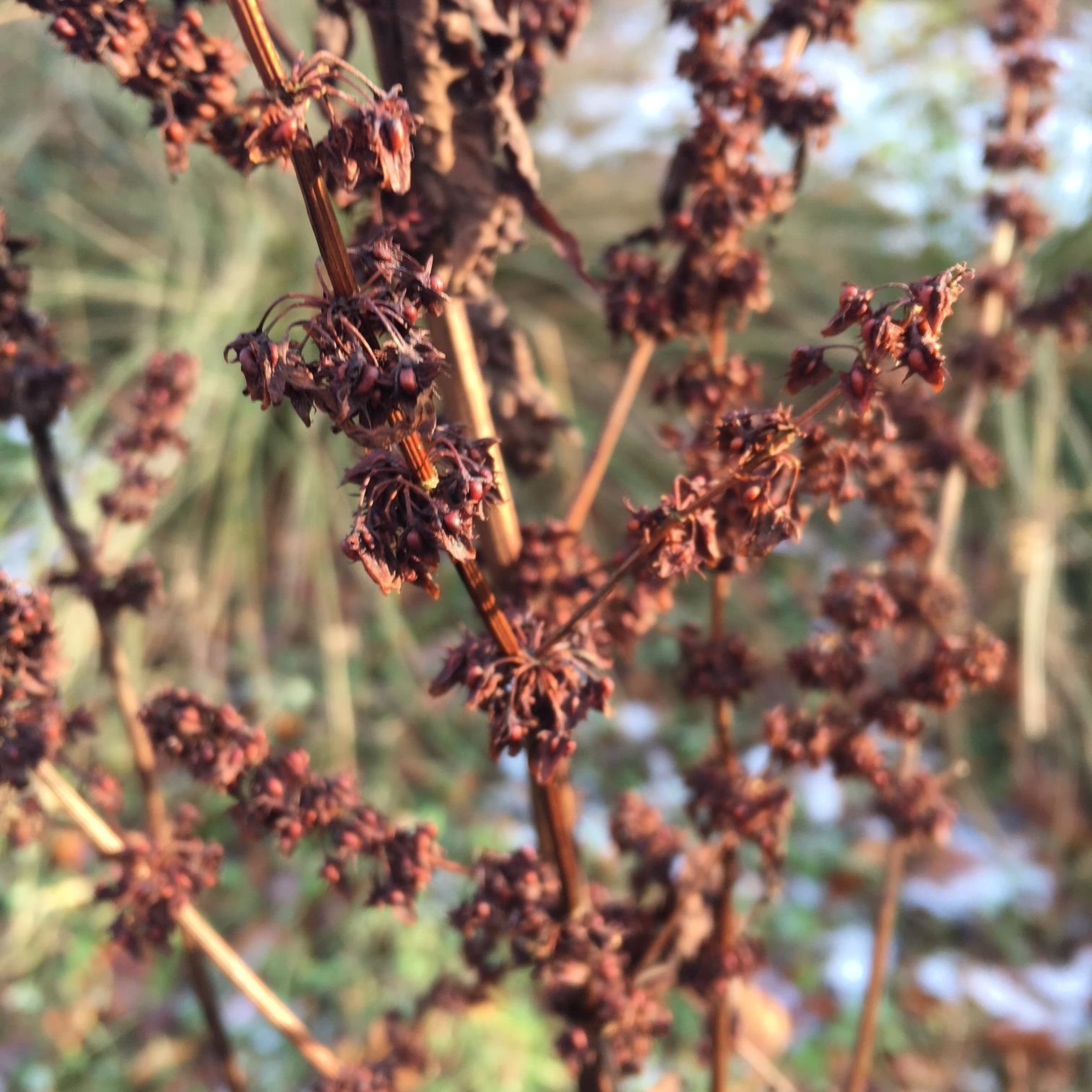 The next step was to form about 15 hogs – bundles of two or three docken stems. Next I took the middle of my simmens and began weaving over and under the centre each hog, using my teeth to maintain the tension of the rope (like in the photo below).

As I progressed along I kept pulling out more simmens from the clews, weaving over and under, until I had reached the end of the row of hogs. I repeated the process returning back to the start. The next step was to bend the hogs up to form a ‘V-shape’, then continue the process of weaving, adding dditional hogs to form the ends of the kishie.

Once I had woven 10 layers of simmens around the dockens I tried to fold the stems down to form the rim or mouth of the kishie, weaving more rope around them to make them secure. Unfortunately, because the docken’s hadn’t been soaked enough, they tended to snap. The last step was to form a rope harness. Traditionally this would have been placed over both shoulders with the kishie on your back. 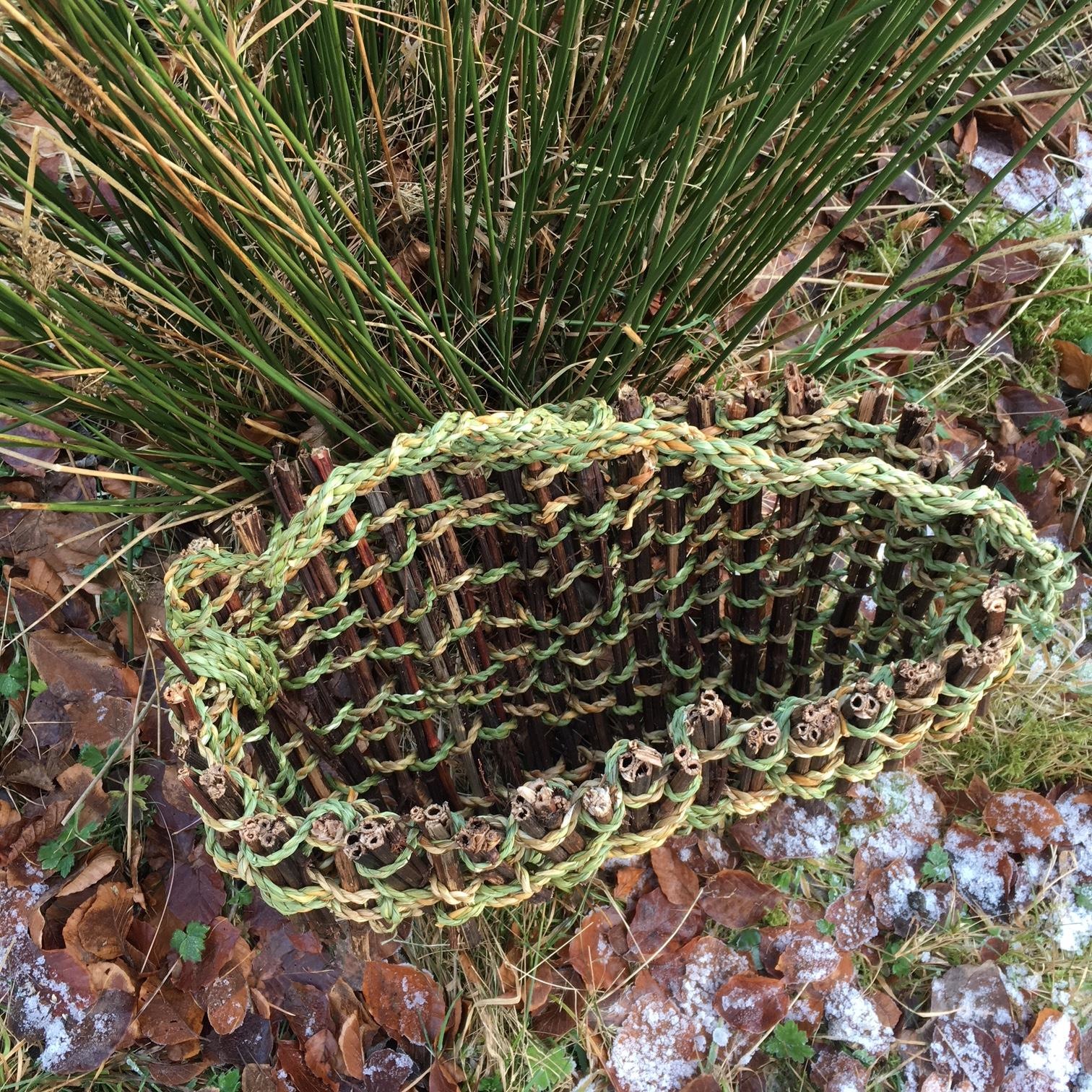 I am pretty pleased with how the kishie turned out but the next one will hopefully be neater.

The Woven Communities website, where I found the instructions to make this kishie, is the outcome of a research project where Scottish basketmakers, anthropologists, curators, botanists, ecologists and archaeologists collaborate to learn more about Scottish vernacular basketry.

Here are a few more photos of Unst: my great-grandfather (Lawrence Bruce) at the Burrafirth cru in 1950 and below that my great-grandmother (Jemima Bruce) with my great uncle Robin and his son Steven at the peat stack at Bothen. 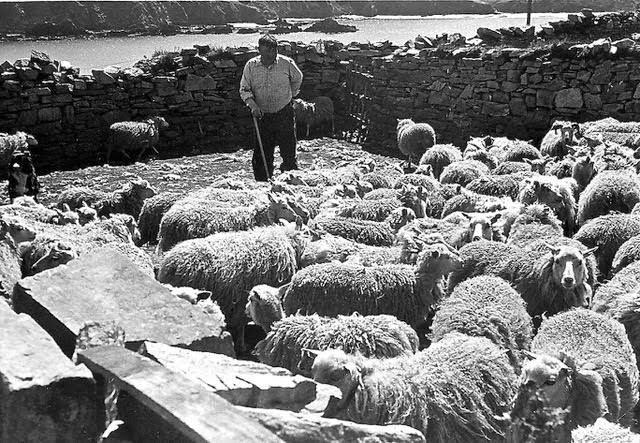 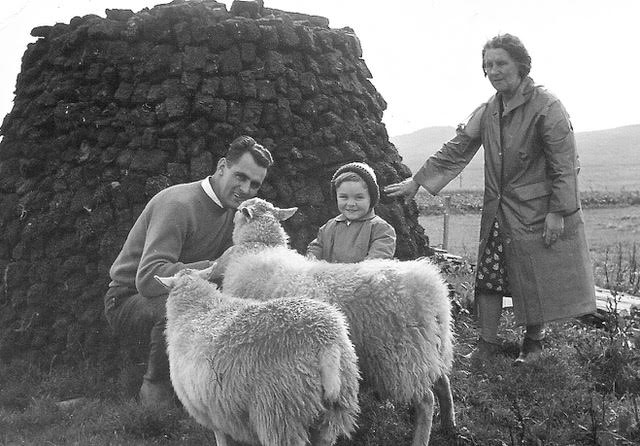 15 thoughts on “Making a Kishie”