November and December are a quieter time of year for me, time for catching up with friends and some personal hillwalking adventures. I’d arranged to meet my friend Jon Foden (Nettle) on December the 4th for a day on the hill. He’s a man of many talents: a paramedic, marine, ski-mountaineer, climber, mountain biker, fell runner and owner of Routes Mountain Sports.  When it comes to the outdoors there are few more qualified than Nettle.  I’d mentioned that I was keen to do the Grey Corries and he was keen – Stob Ban was one of only a few munros he’d left to do. So a plan emerged, a very early start, head up to Spean Bridge and do a 7 hour circuit of Stob Coire Claurigh (1,177m meaning The peak of the Corrie of Brawling) and Stob Ban (977m meaning White Peak). 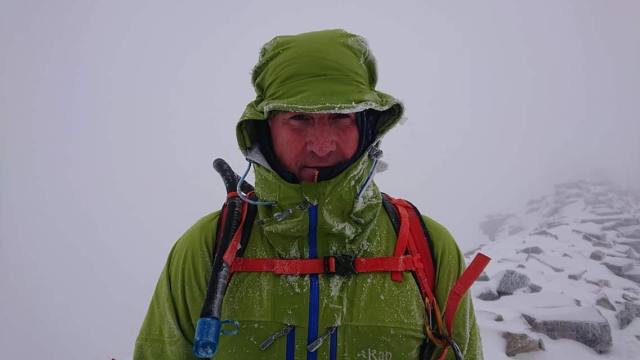 I was keen to be out for a second day so I also arranged to meet up with my friend Murray Wilson on the 5th of December. Murray is the owner of Kingdom Guides, a hillwalking company running hill days, navigation and first aid course throughout the year.  He’s a consummate professional when it comes to hills: experienced and thoroughly prepared. My approach to the hills is a little more asthetic. I’d be staying in my tent overnight and Murray would be in his van, taking great pleasure to tell me how warm and comfortable he was: “Al, you’ve got to get a van”, he’d say, or his favourite remark …. “Had to take a layer off last night, just to warm last night”. Our plan for the 5th was to do the Grey Corries ridge taking in Stob Coire Claurigh, Stob Coire an Laoigh (1,116m meaning The peak of the Coire of the Calf) and Stob Choinnnich Mor (1094m meaning The peak of the Moss).

The Grey Corries are a fantastic range of 12 quartzite peaks – four of which are munros – lying to the east of Aonach Beag in Lochaber. The ridge never drops below 800m and presents a really enjoyable hillwalking challenge. In places the ridge is broad and in others it narrows and involves a little srambling. The mountains are also high, Stob Coire Claurigh (1,177m) being the 15th highest hill in the UK.

My hill day with Nettle began with a visit to the Wee Minister, a wooden sculpture of Reverend John MacIntosh, former Moderator of the Church of Scotland in the 1880s. The current scuplture was made in 2010, replacing the original stone statue that was located in Fort William, then Spean Bridge before falling into disrepair. Today the Wee Minister has a collection box for Lochaber Mountain Rescue and is said to bring good luck to hillwalkers, although I suspect Revered John Macintosh would have disapproved of the concept of ‘luck’.

Our ascent of Stob Coire Claurigh took three hours via the north facing slopes of Stob Coire Gaibhre. At 750m we reached the snow line. Wet moss and grass gave way to frozen turf, ice, small drifts and patches of hard snow. The weather was cold but mostly clear and calm. Hazy sunlight filtered through cloud that lingered on the peaks. The cold stung the exposed skin on my face but otherwise I felt warm and comfortable. It was great to be out in the snow again, my first proper winter hill day of the season. 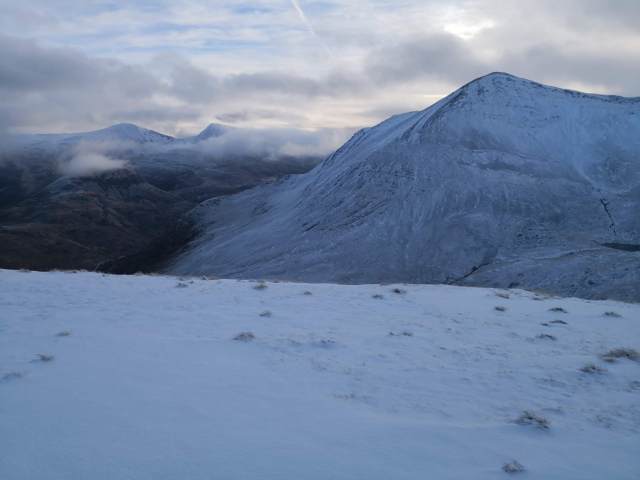 The last section of the ridge up to Stob Coire Claurigh narrows and a little care was needed on the exposed ground. The snow, however, was mostly fresh and grippy and didn’t present any difficulties. We lingered at the summit and had lunch, enjoying the views west along the Grey Corries Ridge, the route for tomorrow’s hillwalk with Murray. 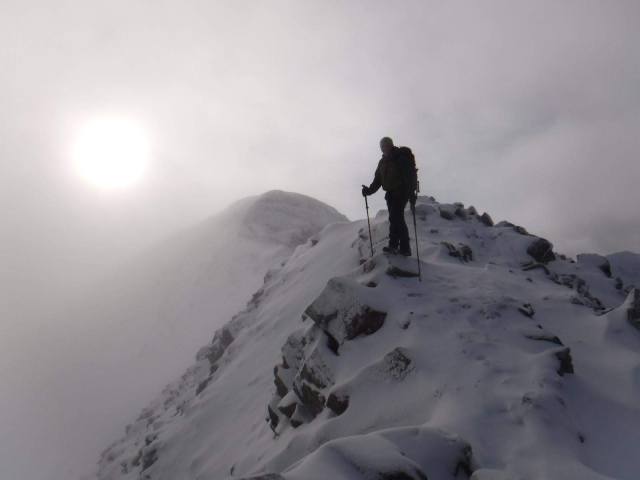 From the summit we descended south to a col at 800m then ascended the steep quartz scree slopes of Stob Ban. Our route back was via a Glen called Lairig Leacach, where there’s a small Mountain Bothies Association bothy. From there it was 7km walking on an easy track. 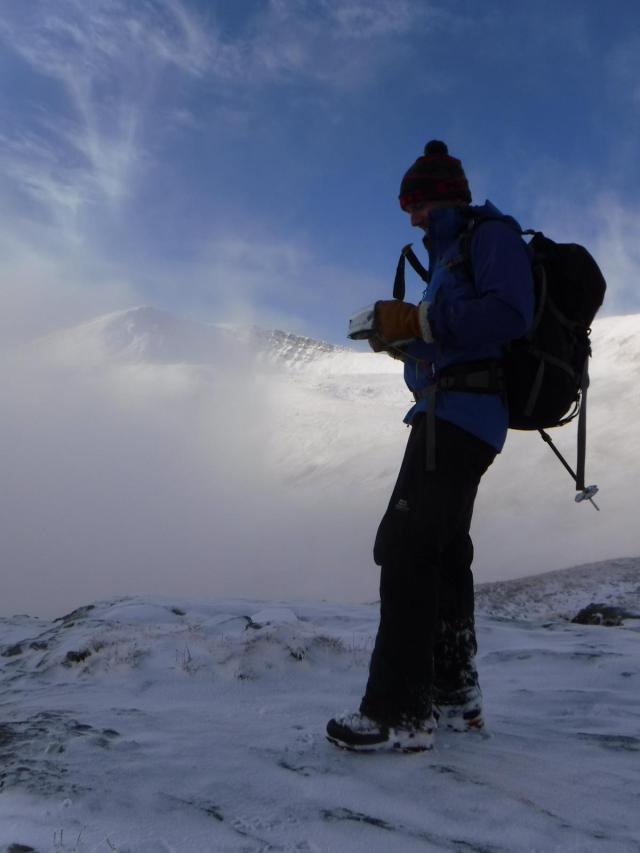 Back at the car, Nettle headed off and set about erecting my little one person tent. The sun had set and with clear skys the temperature dropped. With cold fingers, feeling damp and a bit dehydrated I got into my sleeping bag and fell sound asleep. At 5pm, bang on time, Murray arrived and we headed off to the pub for a curry and some beer.

There was a hard frost overnight and my boots, gaiters and salopettes froze in the porch of my tent. Getting my frozen kit on was a bit uncomfortable but Murray, ever ready and organised, had cooked breakfast and presented me with a roll and sausage and coffee… wonderful!

The weather on day two was a little warmer and much windier. There was more cloud and the visibility worse, especially later in the day when the temperature began to rise. Our route involved an ascent Stob Coire Claurigh again then west along the Grey Corries ridge. 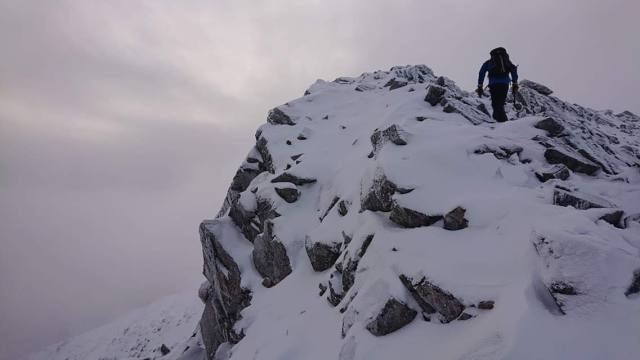 We made good progress throughout the day completing the round of three munros in 8 hours. The last and most westerly munro – Stob Choinnich Mor – involved the ascent of some steep snowy ground. With crampons and ice axes we front pointed up the hard snow then continued on easier ground to the summit. The way back too us over the rocky peak of Stob Coire Essain and the long north facing slope of Beinn na Socaidh. We arrived back at the car at 4pm, just before the light faded, ending a brilliant day on the hills. 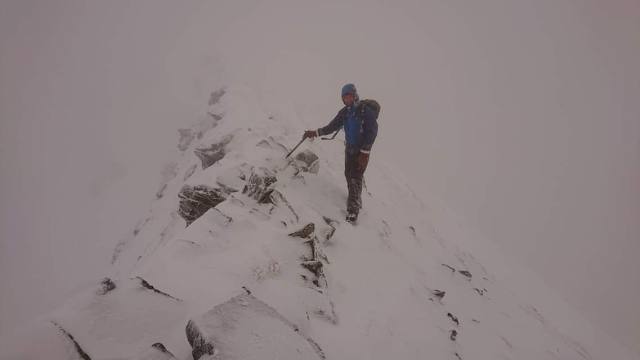 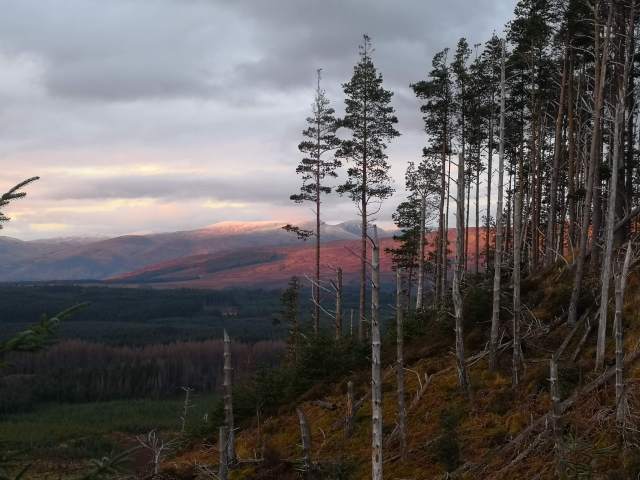 One thought on “Winter Hillwalking on the Grey Corries”