In March, trees in Scotland start to come back into leaf. Now’s a good time to study tree buds as they get bigger and begin to open up. Hawthorn and elder are amongst the first and oak and ash among the last to come into leaf. All of these photos were taken in Mugdock Country Park, just to the north of Glasgow.

Goat WillowSalix caprea –  This type of willow is sometimes called a ‘pussy willow’ after the grey male flowers which look like cat’s paws. The buds are on alternate sides, are hairless, greenish brown in colour and pressed close to the twig.

Common LimeTilia x europaea  – Lime tree buds are dark red in colour and on opposite sides of the twig. Notice how the twig branches off at an angle after each bud. Lime trees are very common in parks in Scotland. 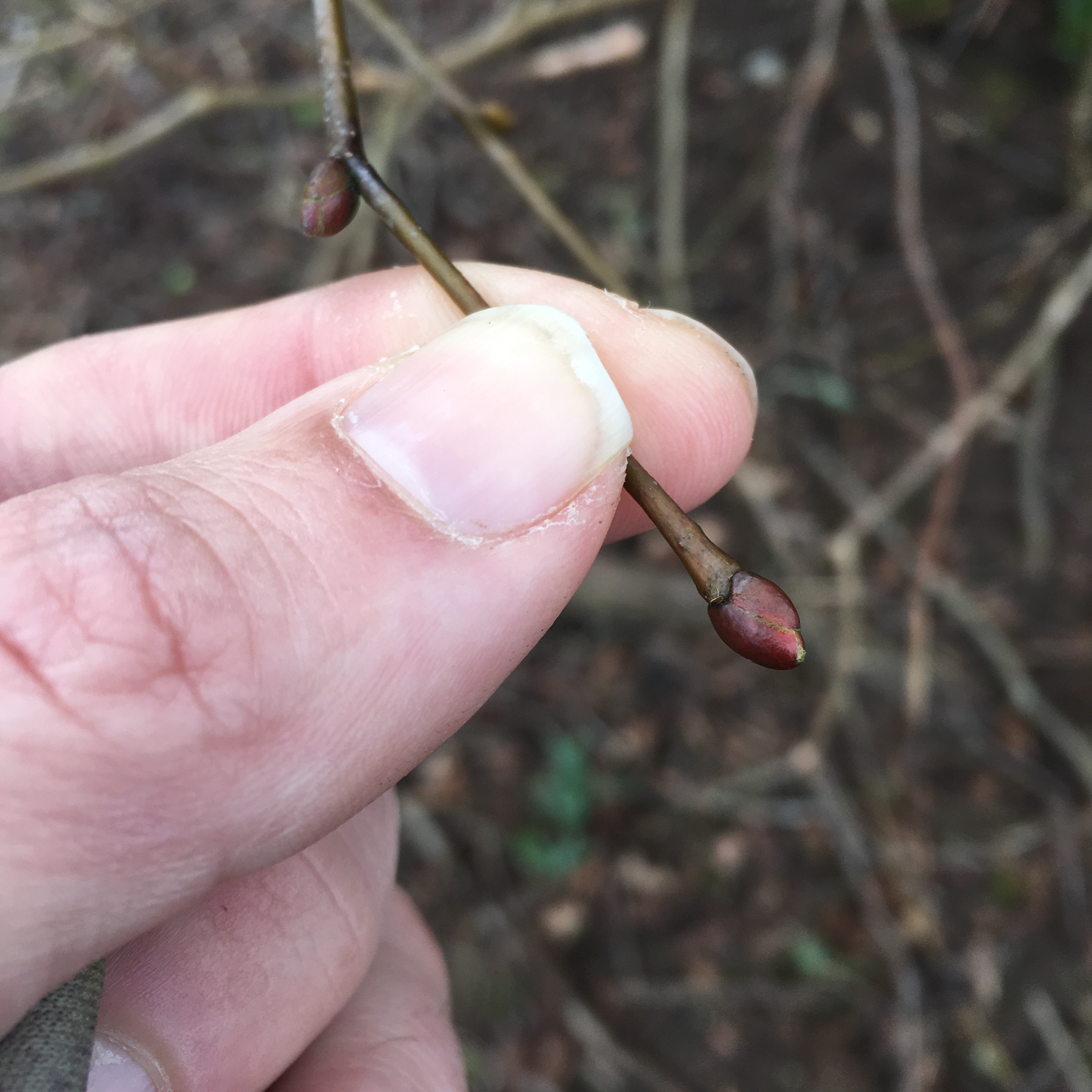 ElderSambucus nigra – Elder trees are among the first to come into leaf. The buds have a ragged scruffy look and are dark red in colour. The shape of the tree and its bark are quite distinctive. Young branches grow upright and straight. 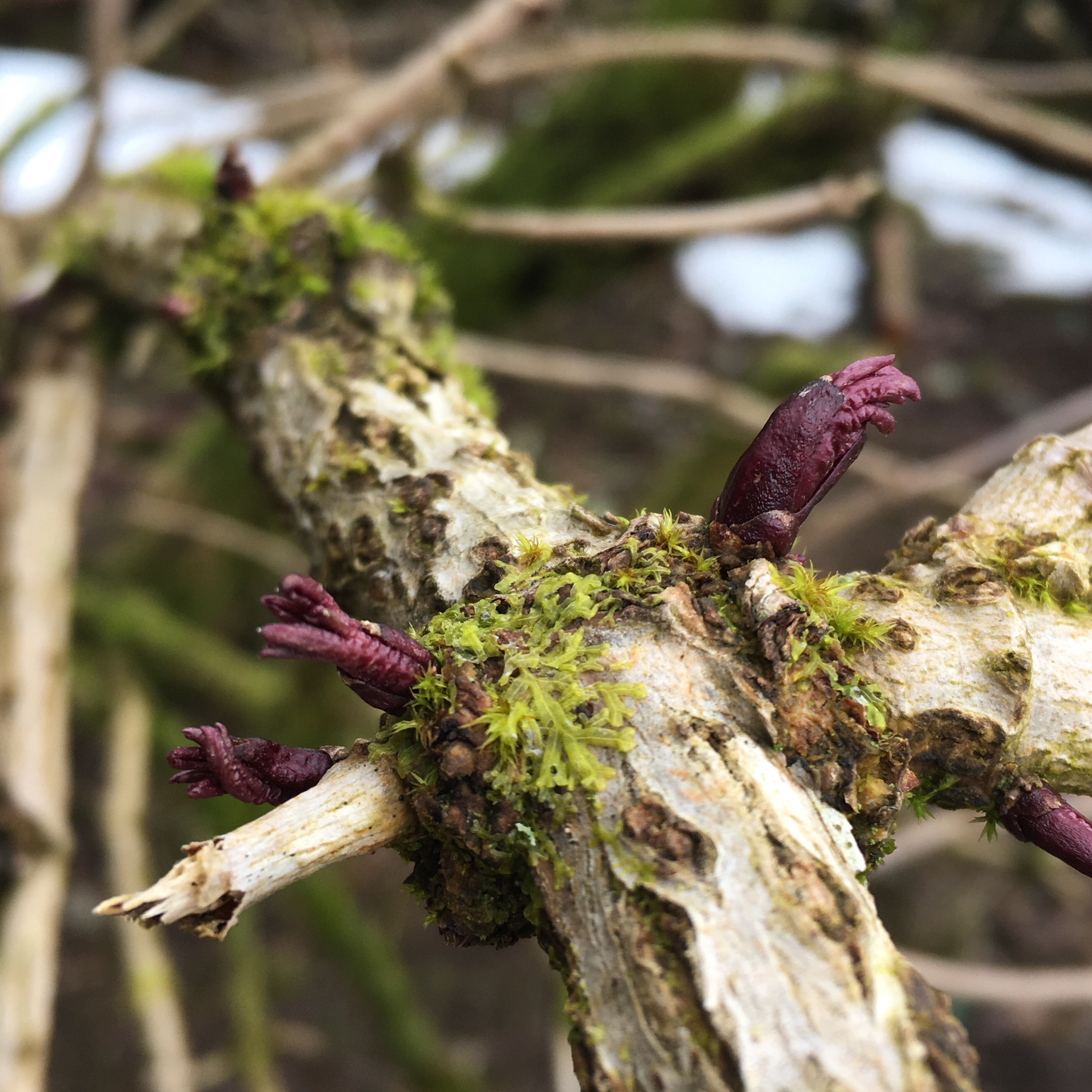 Horse chestnutAesculus hippocastanum – The buds of a Horse chestnut are large and sticky to touch. They are brown in colour. Leaf stalks leave a distinctive horseshoe-shaped scar on the twigs.  The Horse chestnut is a non-native species in Britain and was introduced from the Balkans in the early seventeenth century. Another theory behind the horse reference in its name is that the Turks used to feed the nuts to their horses. 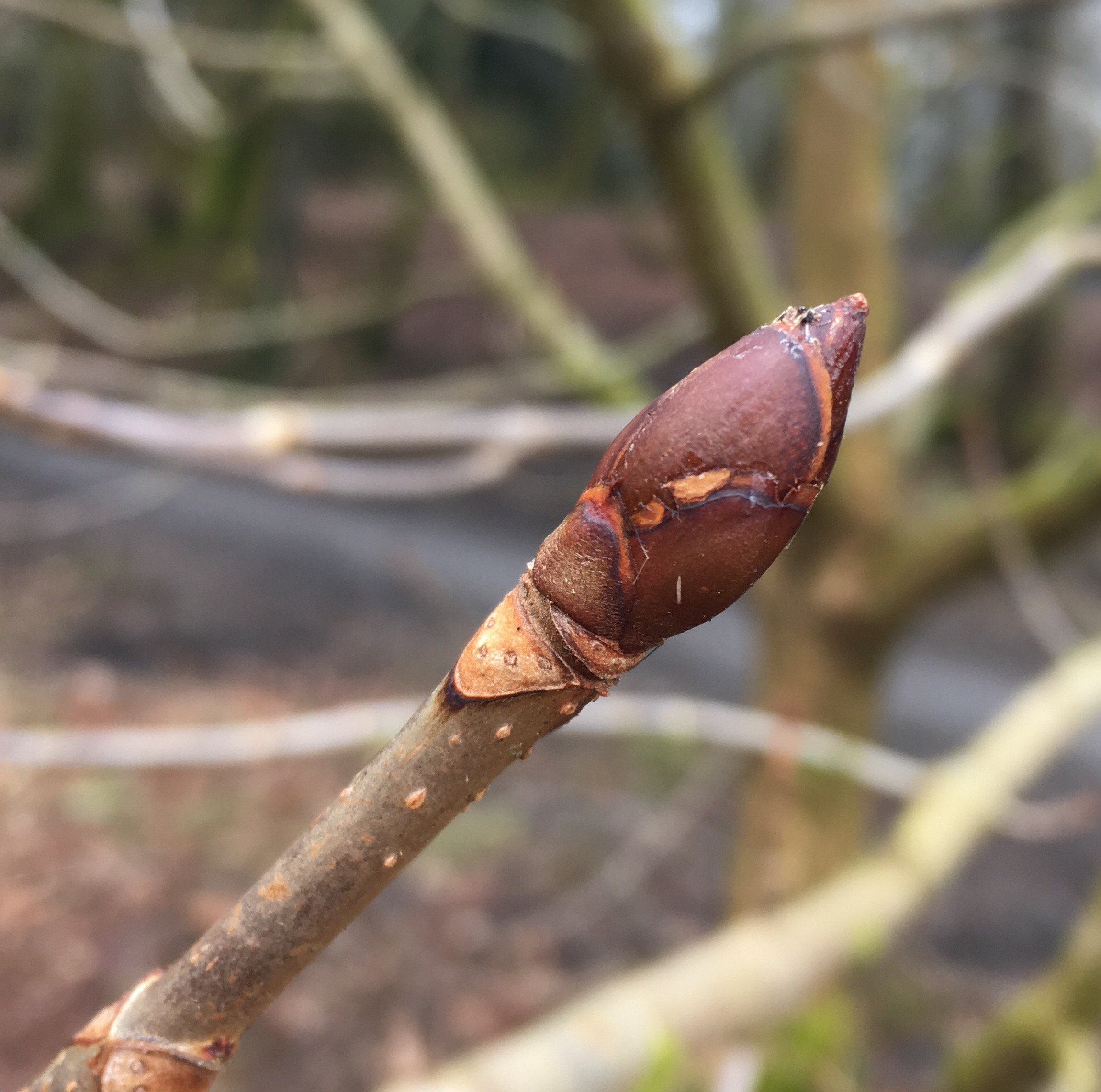 RowanSorbus aucuparia – The buds of a Rowan tree have fine grey hairs on them. Below the bud the twig looks wrinkled like the neck of a turtle. Deer love to browse on Rowan trees. 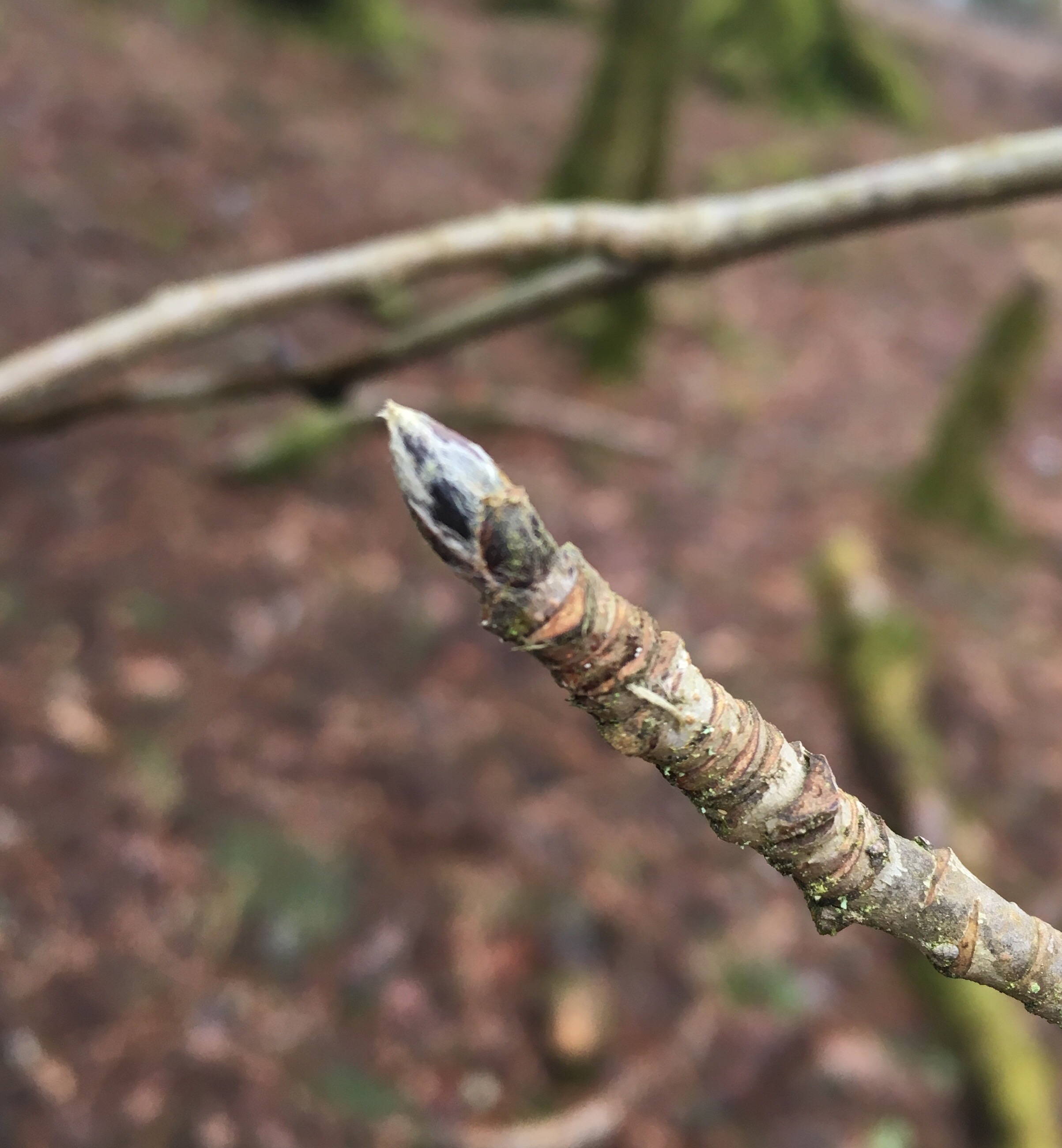 SycamoreAcer pseudoplatanus – Sycamores are another non-native tree in Britain. The buds are green with scales. I think the buds look a bit like an unripe pineapple. Like the Horse chestnut this tree also has distinctive leaf scars on the twigs.

HawthornCrataaegus monogyna – Hawthorn buds come into leaf in early spring. The buds are on alternate sides of the twig. The spines grow out from the base of the bud, distinguishing them from blackthorn trees. The new leaves are bright green and are edible.

AshFraxinus excelsior – Ash trees are quite easy to identify in winter because the buds are big and black. The terminal bud looks a bit like a hoof or perhaps a bishop’s hat. On a mature tree the ends of the branches curl upwards.

Larch, EuropeanLarix decidua – As the latin name infers the Larch tree is deciduous. It is the only conifer tree to loose its needles in winter. It is a non-native tree and was introduced from continental Europe in the seventeenth century. The buds are short and stubby. The twigs also have small round cones on them.

BeechFagus sylvatica – Beech tree buds are long, slender and spear like. The tree can be quite easy to identify in winter because the dead leaves often stay on the twigs. The bark of the tree is smooth and grey. Beech tree leaves are poisonous and inhibit the growth of other trees, shrubs and plants beneath it, making beech woodland open and clear and easy to walk through. 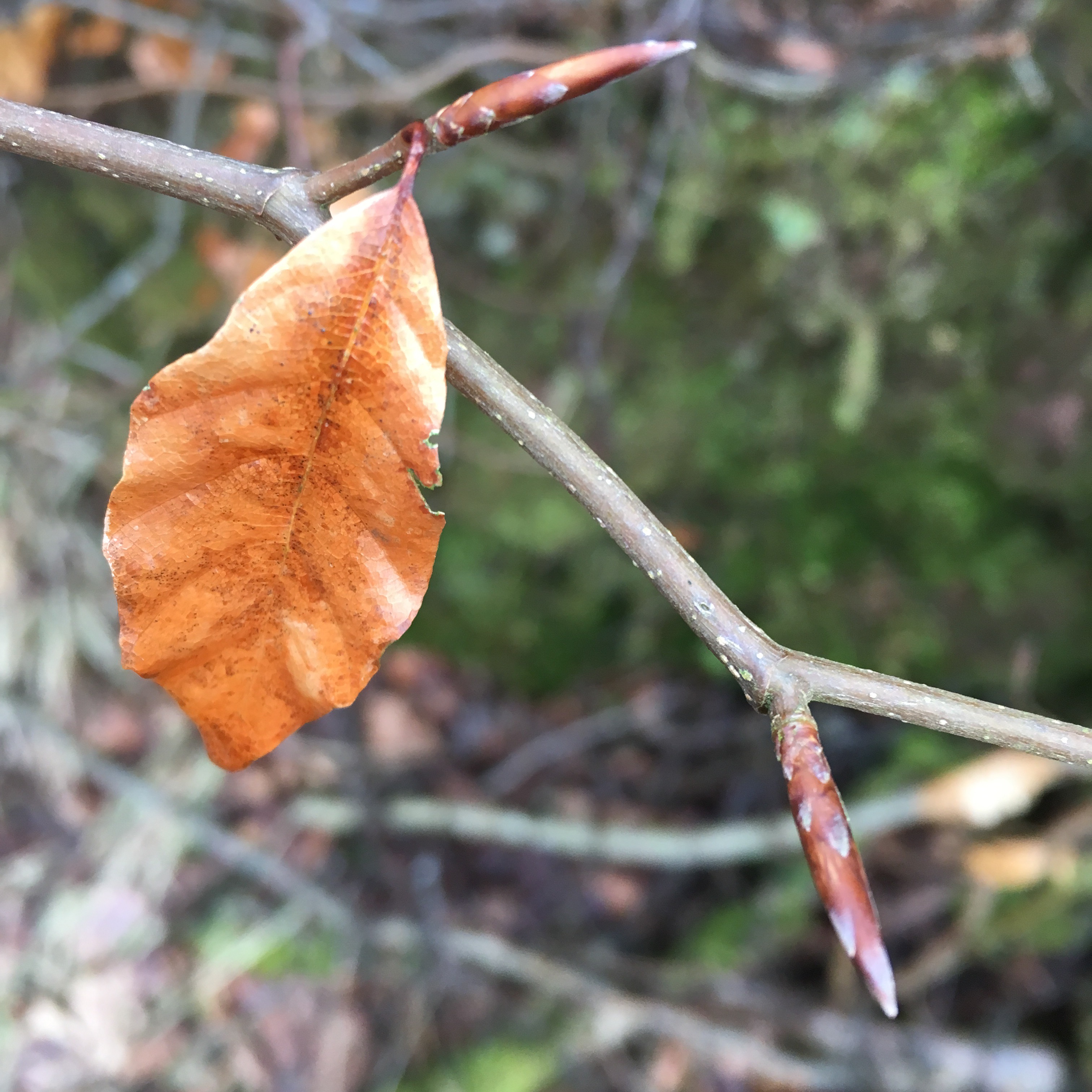 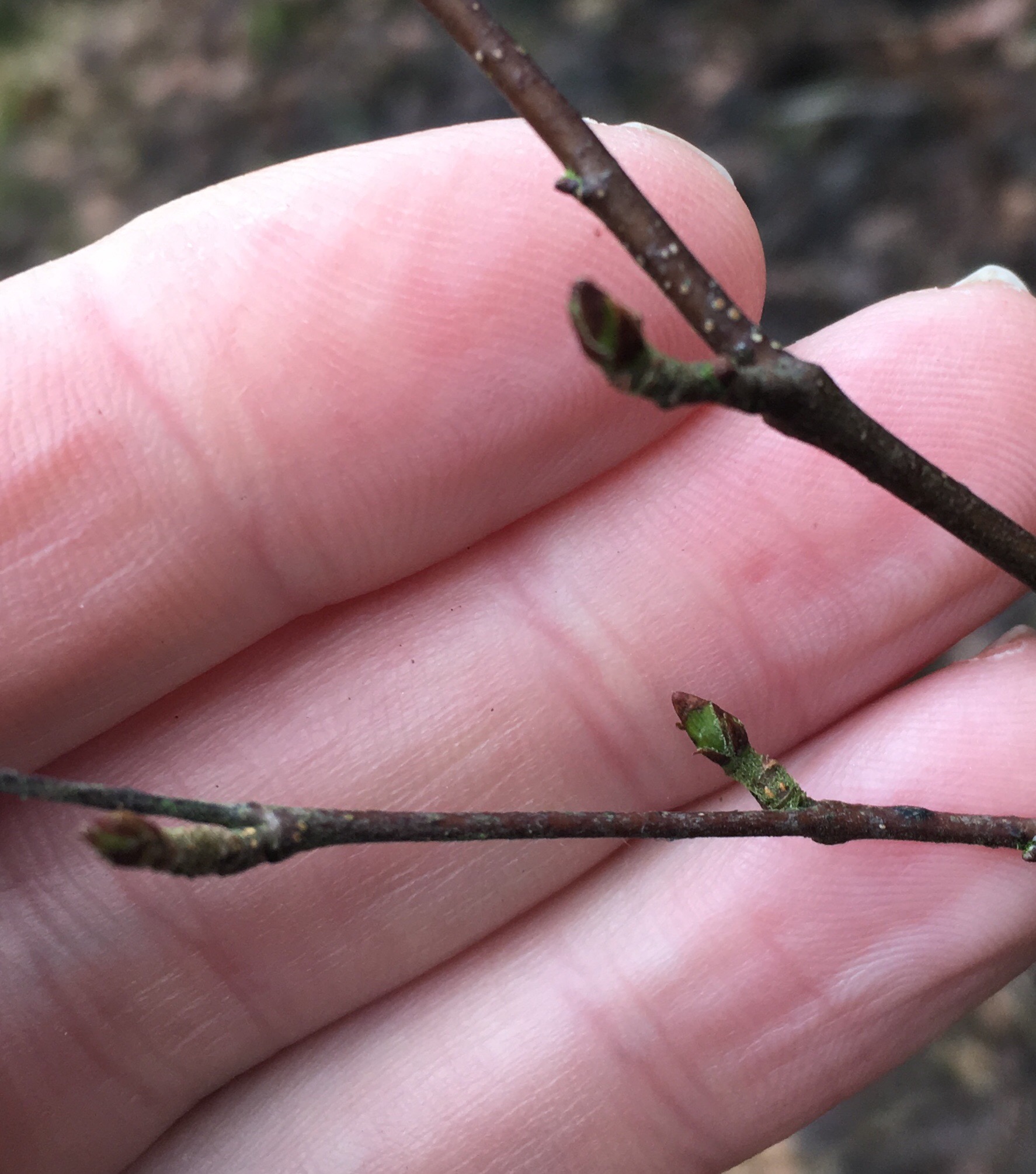 AspenPopulus tremula – The buds of an Aspen have sharp ends, are scaly and spiral around the twig. The buds are also pressed close to the twig. The twigs have distinctive leaf scars. Aspen’s aren’t very common and are quite hard to find without their trembling round leaves.

HazelCorylus avellana – Hazel buds are small, reddish-green and have scales. Hazel trees also have catkins. The shape of the tree is distinctive: they often have multiple branches growing up from the ground. The twigs have little hairs on them as well. 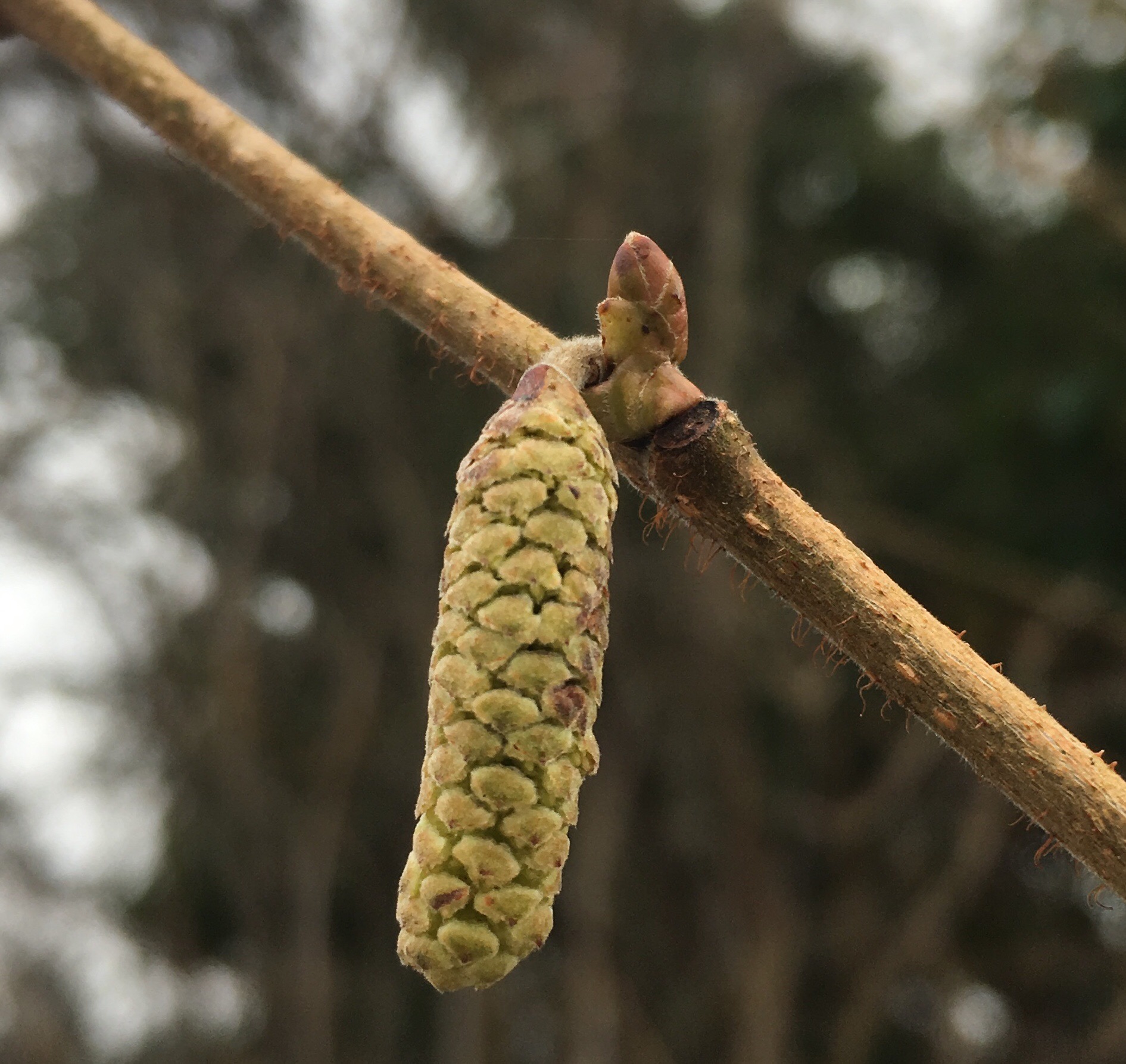 OakQuercus robur – Oak trees have a cluster buds at the end of the twigs. The buds are brown in colour and have three scales each. Probably the most noticable feature of an oak in winter is its fissured bark and knarly, twisted branches. 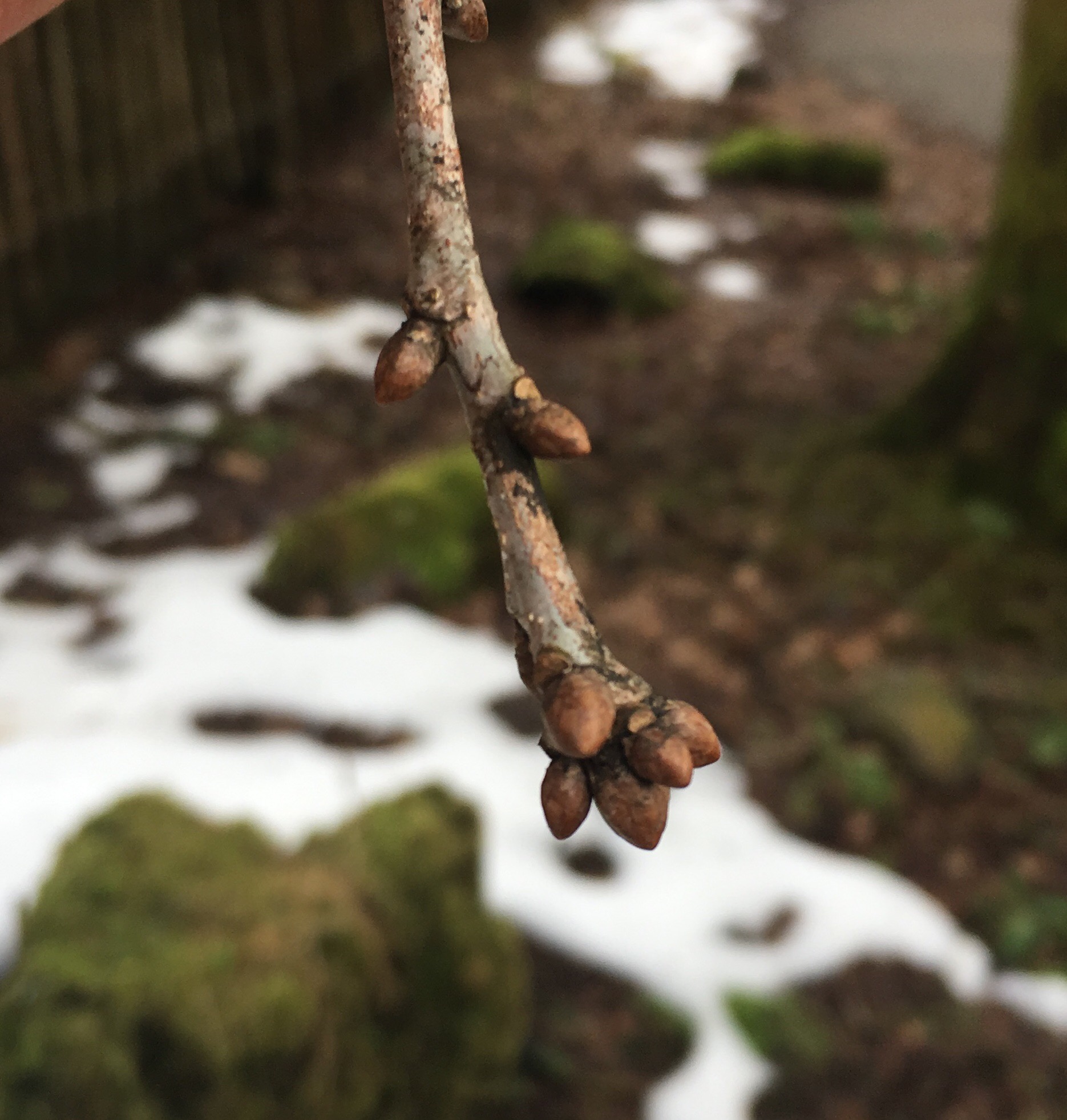 AlderAlnus glutinosa – Alder buds are red with tiny hairs. They look like little boxing gloves. Alders also have catkins and little round cones. They can often be found growing along streams, rivers and wet areas.

Whilst out at Mugdock today I also saw primroses and snowdrops, two species of flowers that can be seen in the early Spring.