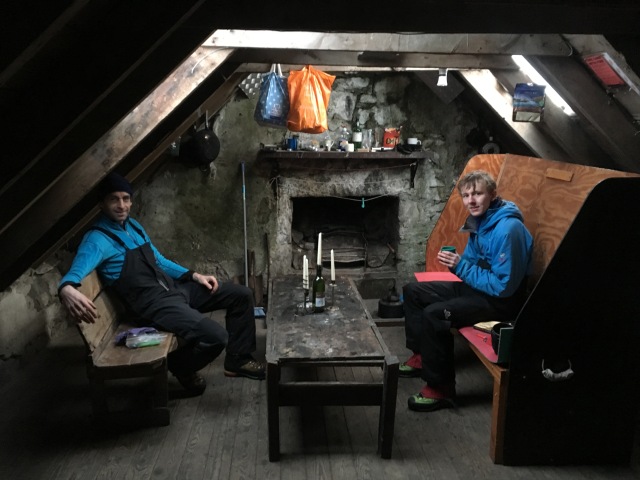 Me, my son Magnus and my friend Jim – the ‘Milanese Munro-bagger’ (more on that in a future blog) – set off on the 2nd of January with the objective of bagging five munros in the West Highlands over six days, staying in three bothies (Kinbreak, Sourlies and Barrisdale).

Many of the best adventures are one way journies. There’s something about being dropped off somewhere and needing to be somewhere else, many miles distant, by a certain date, that adds excitment. That, added to the absense of any mobile signal at all at the end of Loch Arkaig, made use feel pretty isolated as we were dropped off by taxi.  With one hour’s daylight left we had six hard kilometres to do to get to Kinbreak bothy, our first base of the trip. Five days later, if all went to plan, we’d be in Inverie in Knoydart.

Before setting off we stashed 6kg coal and 3 days food under a rock, ready to pick up later. Then, after much slipping and squelching we arrived at Kinbreak, a very comfortable bothy close to the mountains of Sgurr Mor and Gairich.

Day two was very wet and windy. It was mild and what little snow there was on the hills was thawing fast. The ascent of Sgurr Mor was pretty straightforward but the gale force winds in the afternoon, with persistent rain, made our ascent of Gairich hard work. After 7 hours on the hill and a tricky river crossing at the end of the day we were very glad to be back at Kinbreak and drying off by the fire. 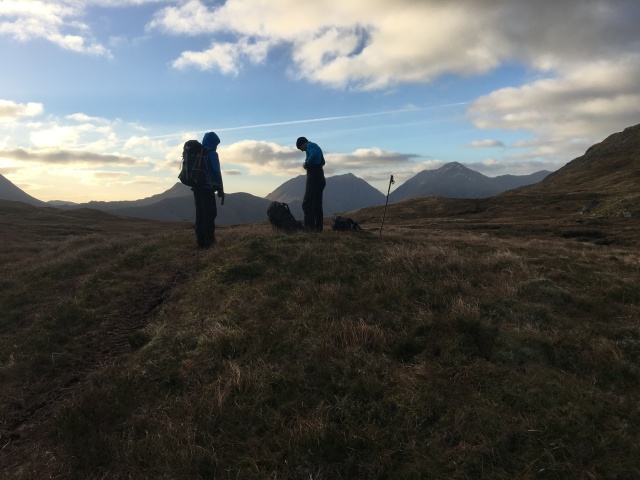 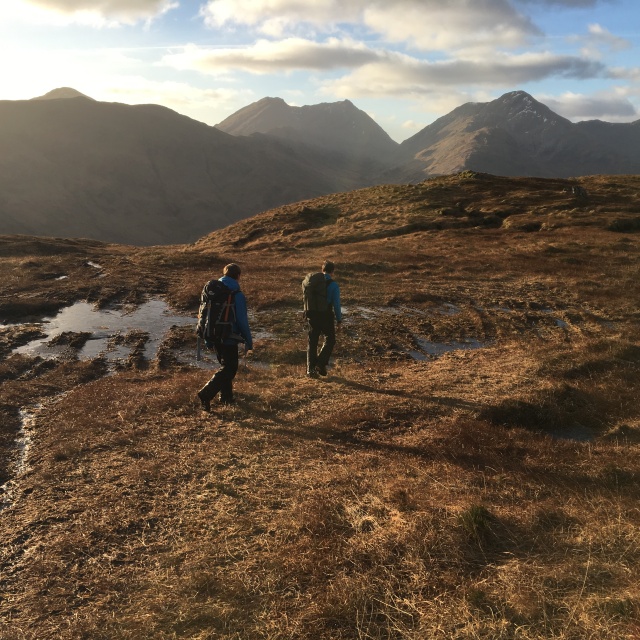 Day three was cold and sunny with no wind at all. We walked back over to the Strathan at the end of Loch Arkaig, picked up our depot of coal, kindling and food and walked the 4 hours to Loch Nevis and Sourlies bothy. This long, fjord-like, sea loch and the bothy that sits just above the shore, has a wonderful atmosphere: wild, remote, rugged and beautiful. 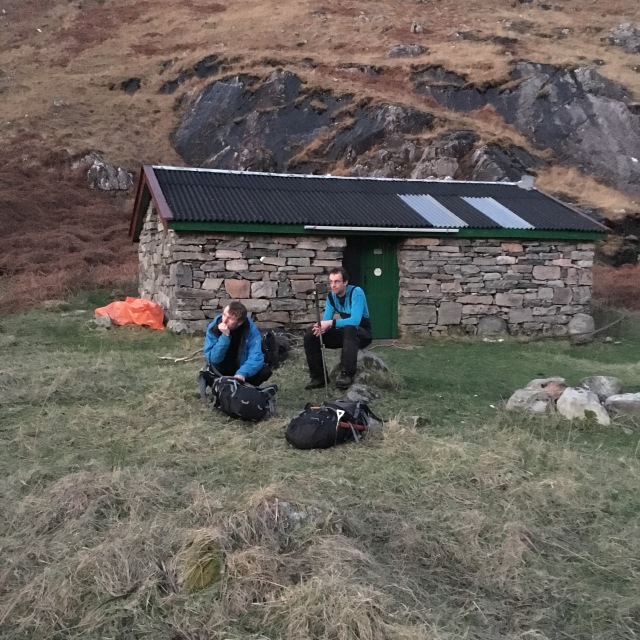 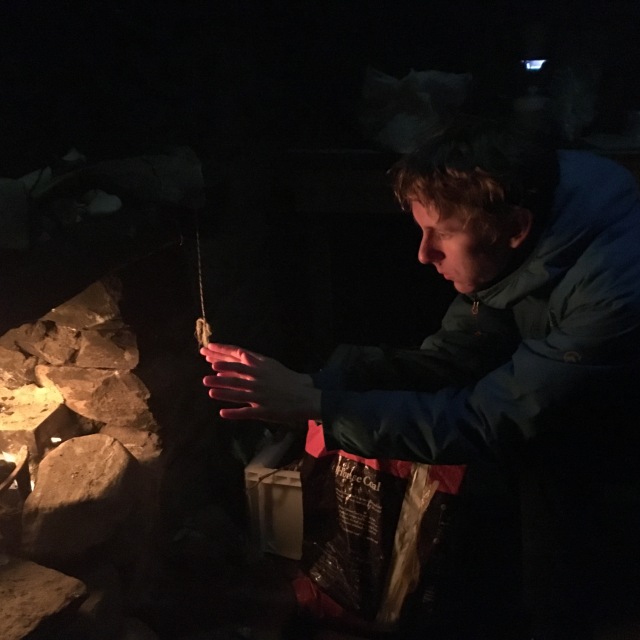 The weather stayed cold and sunny on day four, rewarding us with great views as we explored the shore of Loch Nevis. 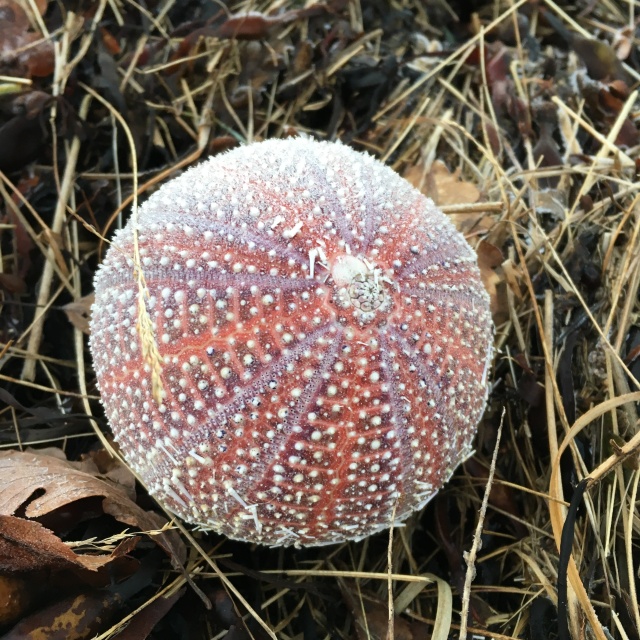 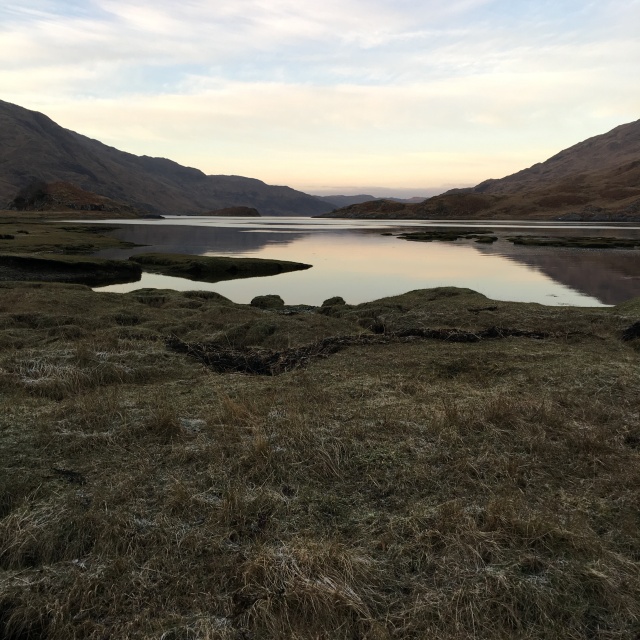 On our way to the fine stalkers path that leads to the mountain pass called Mam Meadail, below Meall Buidhe, we arrived at the old footbridge over the river Carnach. A sign warns ‘bridge in dangerous condition’ and ‘users do so at their own risk’. So Jim proceded to risk all and bridge ‘dangerously’. 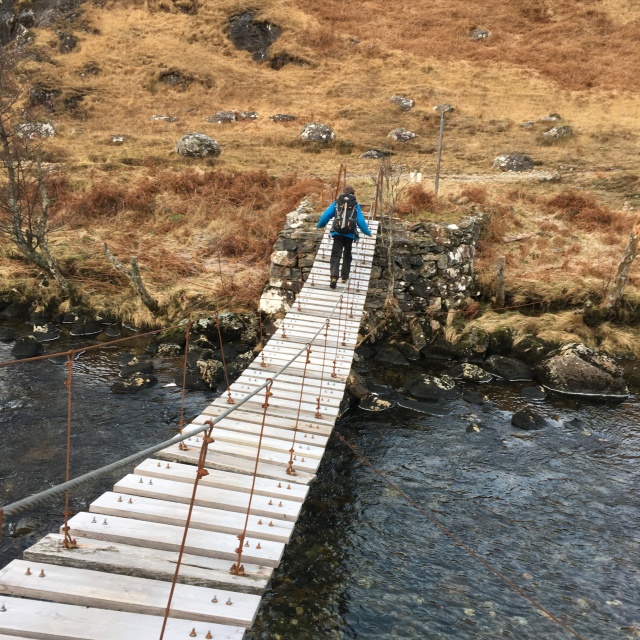 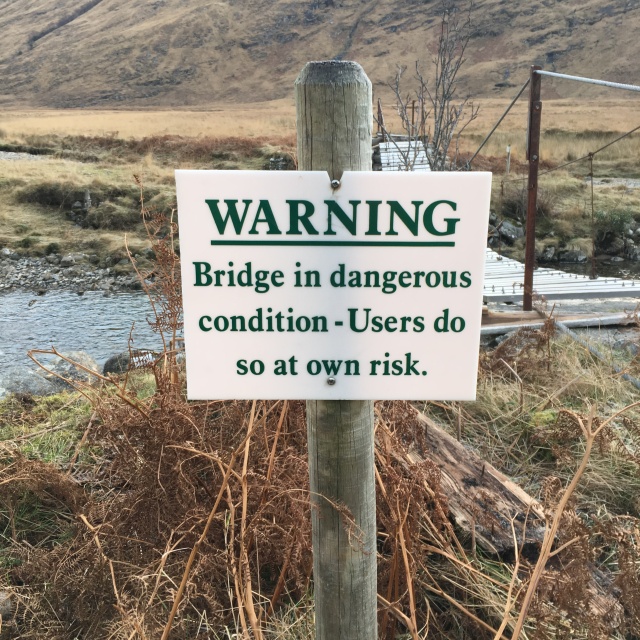 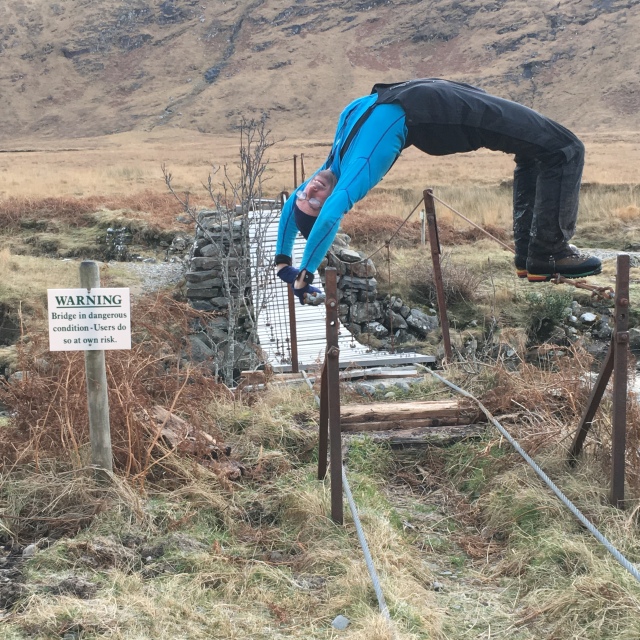 Later in the day, we reached our third munro of the trip, Meall Buidhe (meaning yellow hill). We had views across to Knoydart, Kintail and Affric. Although there was little snow to speak off, the temperature was below freezing and a biting wind made us reach for thicker gloves and extra layers. The rest of the day we enjoyed the rocky, undulating ridge east and north to Luinne Bheinn, a hill I climbed for the first time 26 years ago, when I was 17. The sun set as we desceded the steep northern ridge of Luinne Bheinn, briefly lighting up the hills with pink light. 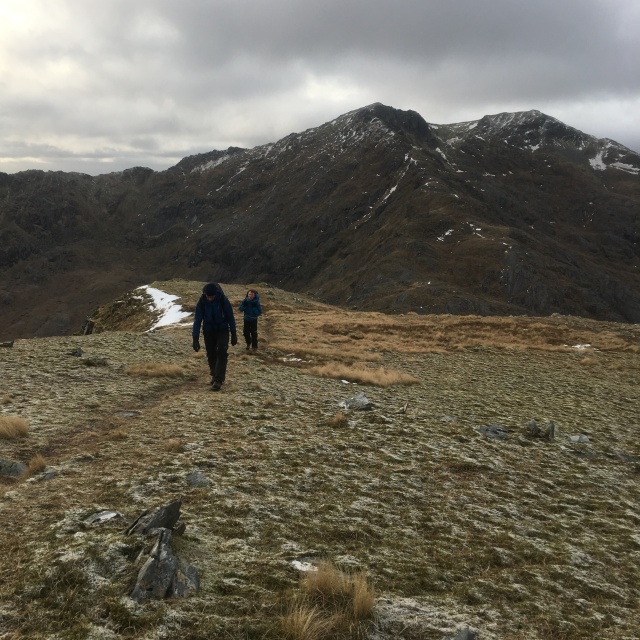 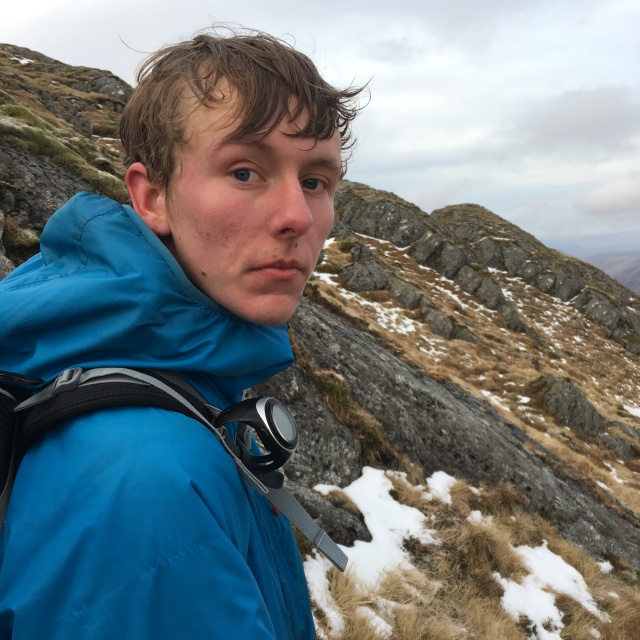 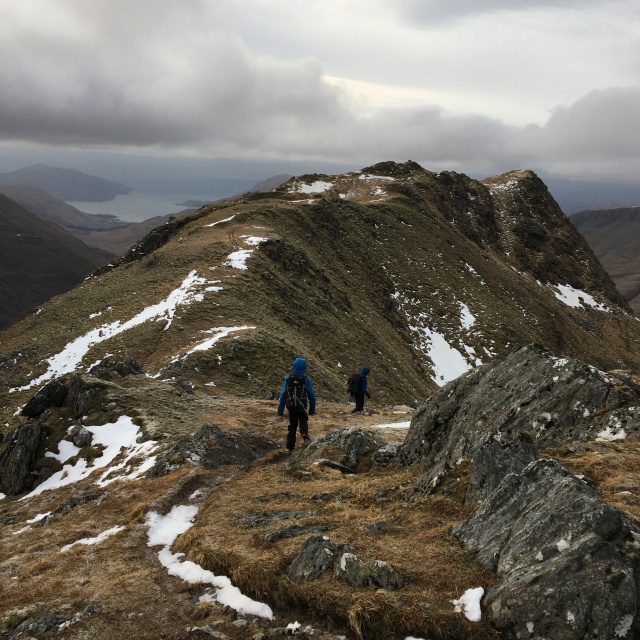 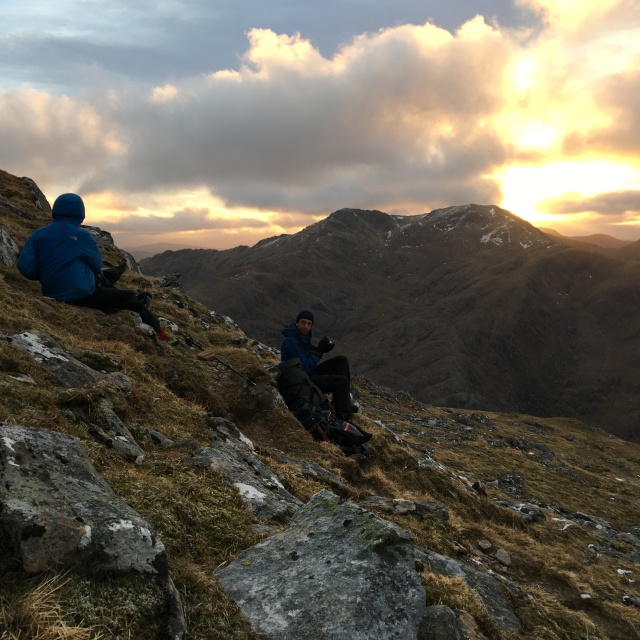 We made our way all the way back down to sea level to Barrisdale, to our third bothy. This broad flat glen looks out onto Loch Hourn. The bothy, many years ago had a fine wood burning stove but, sadly, no longer. Although a bit chilly, we were grateful for the facilities the estate has afforded the bothy: electricity, running water and a toilet! For £3 a night its pretty good value.

Day five was our last mountain day, the ascent of Ladhar Bheinn. Magnus, struggling with the discomfot of new boots decided – quite sensibly we would later discover – to miss out the hill and hike over Mam Barrisdale to Inverie. Jim and I parted ways with Magnus around 8:30am and headed round to coast to Coirre Dhorrcail, into the sideways rain and mountain fog.

It was very mild and we struggled to keep dry. With sweating too much in the warm weather and all the rain, it was a day that defeats the best waterproofs. The only way to keep warm in the damp clamy weather is to keep moving.  The mountain stream running through Coirre Dhorrcial was in spate by the time we got to it and we had to take a great deal of care crossing it. After that 800m of steep grass and crag lay ahead. With winter boots and all our overnight kit on our rucksacks it was slow going. About 3 hours in to the climb and close to the top, I ran out of steam. I shouted ahead to Jim, “I need to stop, need to eat something”. We took shelter from the wind and I slumped down, tired and suffering from low blood sugar. After chocolate, peanuts, oatcakes and hot tea I felt revived but, having stopped for 10min we were cold. We were soaked through and had to get moving and get warm.

20 minutes later we had summited and were making fast progress downhill towards Inverie, warming up and in better spirits. We reached Inverie 5 and a half hours after leaving Barrisdale and stopped at the cafe for coffee and cake. We met Magnus at the Foundation bunkhouse and enjoyed the comforts of a drying room, hot showers and a warm fire. 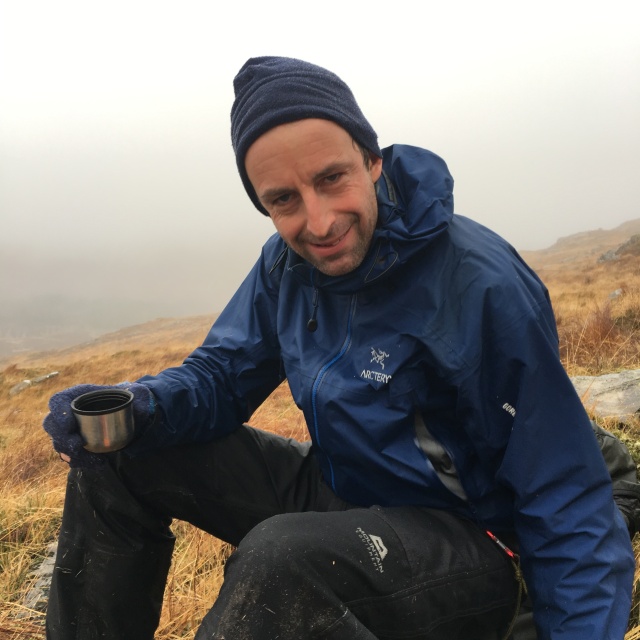 The following morning – day six – we watched the sun come up over Loch Nevis, while we waited for the ferry to Mallaig. It had been a great trip. Great to be back in Knoydart. Will be back again soon. 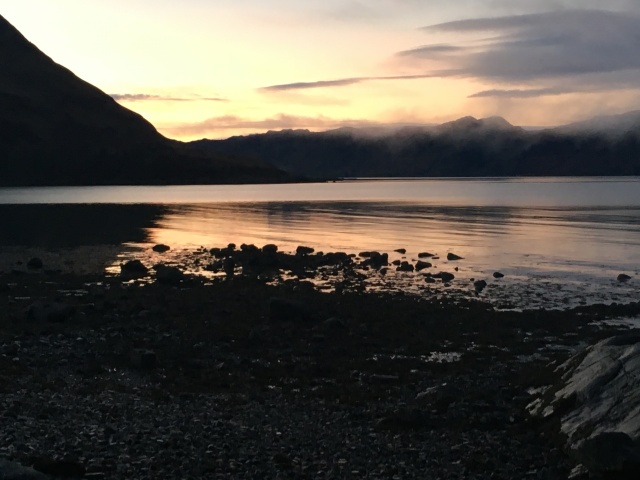